Provisional Leaderboard after SS14 (of 17)

He's been there before so often and he was there again tonight. Dougi Hall was leading this 40th Tunnock's Tour of Mull Rally, but tragedy struck, not once, but twice. The red Lancer punctured on the long 23 mile Tuath/Calgary test and then it punctured again on the Mishnish Lochs stage, and he dropped from the rally lead to 10th place. It looks very much as though this event has denied him yet again.

That however was good news for Calum Duffy who has swept into the lead with two stages to go. James MacGillivray is up to second John Cope was looking a bit dis-chuffed at the end of the Lochs “What did I do? I put slicks on for the Lochs, the wettest stage of the night!”

Daniel Harper is up to 4th now: “If I can get to the end 'll be happy. I'm sick of not getting to the end. The last two or three stages always seem to get me.”

And for those of you wondering why Stage 16 at Gribun was cancelled, it's easy to answer, but not so easy to understand why. After trouble last night with cows wandering on to the road, the farmer was contacted ahead of tonight's re-run of that stage. Despite pleas from the organisers to move his cows to higher pasture he said he was unable to guarantee that his cows would not be left to their own devices tonight again. On that basis, and on the grounds of safety, the organisers really had no choice but to cancel the stage.

And finally, an apology to those eagle-eyed viewers who spotted a slight geographical error in the previous two MullMurmurs when I mistakenly reported my location. Put it down to long hours, lack of sleep, or stupidity, but it's correct this time! 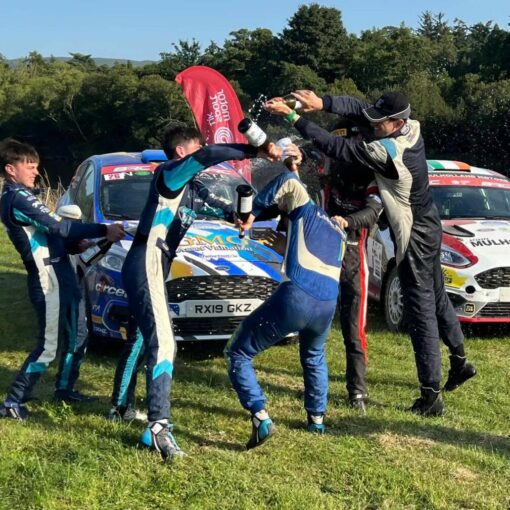 AML, The official photographers for the Tour of Mull, are offering to take photos of Crews and Cars, which will be included in the standard CD of shots from the rally that they are offering competitors…

Awards from the 1996 Philips Tour of Mull