Awards from the 1995 Philips Tour of Mull

Provisional Leaderboard after SS14 (of 19)

They say that ‘things go bump in the night’, well they bump even harder in daylight. There are cars strewn across the landscape of Mull as the second Leg of the 38th Tunnock’s Tour of Mull Rally draws to a close, but there’s more. Rally leader Neil MacKinnon was late into the start of the final afternoon stage and was off the pace through it. Drama afoot? We’ll try and find out. But look at the scrap for fourth place. MacGillivray is the current holder, but Daniel Harper and Paul Kirtley are only 4 seconds apart.

It was dry again for this afternoon’s second Leg, but rain is forecast for tonight. So fingers crossed for a dry night – even if only for the Marshals’ sake. What a bunch of heroes these lads and lassies are, so drink their health tonight with a cup of tea and a tea cake.

Apparently George MacDonald’s (26) service crew visited him in his bedroom last night and gave him a good talking-to – and told him to get his finger out today! So, yes he was quicker. Who says rallying is not a team sport? …. John Easson Scholarship winner Alick Kerr (75) is getting confident enough to alter the suspension settings on the hired Fiesta and was much quicker as a result today, 43 seconds quicker over the Lochs than last night …. Rick Fry (95) passed two cars in Calgary so he’s on the pace after changing the turbo last night …. Ewen MacGillivray (103) had fuel starvation last night but fixed it this morning and now the clutch is slipping …. Ian Dawes (70) is happy with his pace in the MINI but commenting on Harper and Cressey in the top ten, reckons “they’re brain dead” …. Allan Cameron (76) had  a puncture last night and the clutch failed but is OK today …. Allan MacKay (97) is complaining that his Lancer is too wide and that’s why he got two punctures but is more concerned about the efficiency of the heater, he’s positively sweltering …. a rather noisy approach heralded the arrival of Pete Gibson (102) minus his exhaust which he left behind in Tuath but worse was a 16 mile run with no alternator earlier today …. co-driver Patrick Daley has lost his voice shouting at Paul Reford (113) when the intercom failed – never did a bottle of fizzy Irn Bru taste so good …. a happier man today is John Paterson (48), he changed from 17 inch wheels last night to 15s for today and the Proton handles much better …. also happier was Speedy Runciman (147) who took over a minute off his Lochs time today from last night because they had the right Pace Notes and Haggis was on the ball with his calls proving that teamwork does work …. Barry Renwick (30) had three punctures last night but even more spins although he’s picking up pace better today …. Stephen Taylor (114) changed the suspension overnight and is much happier today …. Mark Constantine (99) knocked a tyre off a rim on a stone in the first stage last night but the fuel pump is cutting out and the lights are flickering, so more trouble ahead …. James Fairbairns (151) has electrical problems and it’s cutting out, he thinks it’s the coil …. losing a chunk of time last night was Ian Forgan (66) when the throttle cable broke in the last stage and he limped out purely on tickover …. local man Donald Brown is struggling with carburettor problems ….  Chris Shield (141) lost 1st ands 2nd gears over the Lochs this afternoon with two stages to go …. Ross Hunter (152) punctured on SS11 and had to drive a mile before he found a safe place to pull over and change it …. in more serious trouble is Tim Stell (40) with intake manifold problems …. and it looks as though Stage 13 was unlucky for Tony Bardy (7), the Hyundai has given up the ghost and doesn’t want to go any further …. John Swinscoe (14) has left the road in Tuath with the Lancer in need of serious First Aid …. Tommi Graham (33) is out on SS9 and Paul Daniel (38) failed to leave the service area after limping in with mechanical problems after SS9 …. John Cowe (61) has broken something and is going no further while Lewis Gallagher (62) has broken a driveshaft …. Sandy Smith (69) has engine failure, class leading Matthew Tarbutt (71) is off in SS10 and we can confirm that Stevie Brown (91) has indeed parked the Nova upside down in a Tuath ditch …. Connor Corkhill (108) has mechanical trouble, Malcolm Davey (111) broke a driveshaft in Tuath and Bear Cub star, John MacCrone (144) looks as though he’s retired the co-operative-built Nova on the road section after Stage 9. Phew, things are getting hectic out there ahead of tonight’s Final Leg.

And a word from the 2300 Club organisers, all competitors (and followers) are advised that MacGochans will have hot drinks, pies and sandwiches for sale after the rally finishes in the early hours of Sunday morning for those in need of sustenance and refreshment at the conclusion of ‘the best rally in the world’.

OK, not quite true, but now we have your attention, the 2300 Club will pay for your ferry and make a contribution towards the cost of your fuel – if you help us out! So if you are thinking of coming to the island to spectate or are coming with a competitor and would like to join in, why not come and marshal instead. There are lots of jobs to suit all abilities.

Get closer to the action, and feel an important part of the weekend. 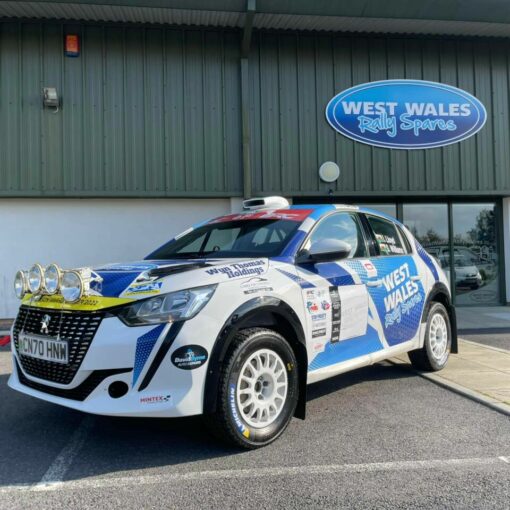 The highs and lows of rallying were never more apparent than when Ioan Lloyd contested the Trackrod Rally Yorkshire last weekend. The […]