Well hullawrerr chinas, and howzitrevvin? Welcome yin and a' to the 29th Philips Tour of Mull Rally here on the wonderfuel Island of Mull, the place where they send trainee TV weather forecasters – as it's the only place you can see all four seasons in one day. But a word to the wise for first timers over here, it doesn't actually rain on the island, it's just that they tend to wash the fresh air pretty often. Cleanliness is next to godliness they say, and this is certainly God's own country!

Rally programmes and all sorts of other memorabilia are on sale in the Aros Hall and the full colour progs include maps which show you exactly where to go and when to get there. This is a compulsive bit of kit for the spectator, make sure you get one!

Other first-timers who are clutching this piece of recycled bog roll may wonder what the hell it is. In their wisdom (weakness or short-sightedness?), the 2300 Car Club organising team have again arranged to have an on-event bulletin service to try and keep you up to date on rally news, So keep an eye open for 'MULLMURMURS' throughout the event. These FREE scandal sheets will be distributed around the rally route at Tobermory, Salen, Craignure and the parts that other periodicals fail to reach.

As usual the fun started last night with the Rally Forum in the Aros Hall where that helluva nice chap, John Fife attempted to maintain a modicum of control over the likes of John Price and Caroline Broad, Chris Griffiths and Neil MacKinnon, and Motoring News Rallies Editor, David Evans. On behalf of the organisers we really appreciate the rally stars taking time out of their pre-event prep to talk to the likes of us. And as far as crowd attendance goes, McCoist and McAuley's viewing figures must have been rubbish last night, 'cos everyone was in the Aros Hall.

Seeded number 1 is Neil MacKinnon and there's a rumour going about that he will get nominated for a Knighthood if he scores a record 10th victory on the island. Arise Sir Boko! But he's really up against it this year. He's only done two events, one in August which he didn't finish due to mechanical problems and the Castle Rally in Southern Ireland a couple of weeks back where he finished 6th in the Kenny McKinstry Impreza he's using this weekend.

His biggest threat comes from south of the border where John Price has been in record breaking form this year winning his 8th national Safety Devices Tarmac Rally title while Chris Griffiths who has been second on the Philips Tour for the past 2 years also finished runner-up to Price in the national series. Price will use that wondrous sounding piece of machinery, the only thing with a Rover badge that is worth having, his V6 MG Metro 6R4. This was the guy who dropped to last place on the first Leg last year when the car smacked a bridge parapet and then fought back to 5th overall. Wonderfuel! And Griffiths is no slouch either. Remember that mesmerising run in the dark up the 23 miler last ear to snatch 2nd place back from Eddie O'Donell.

This year's event is shaping up to be the best yet. Calum Duffy has got his newly rebuilt engine in (at the last minute as usual!) and has run it in for 250 miles, so he's ready "to do the business".

James MacGillivray, who was lying 3rd in a 1600 Corsa 2 years ago is back in another Corsa, so watch out for more giant-killing antics and the O'Donnell twins also reckon they are long overdue a win on their home event. In others words, if you're going spectating to-night, stand well back – rally car shrapnel flies a long way! And what about Billy Bird who finished 3rd on this event 2 years ago and then there's Dougi Hall who held off Price last year for 4th and John Cope's converted his GrpN car to bigger turbo and bigger brakes and Mark Jasper means business having replaced the big Sierra with an Escort. Phew!

Daniel Harper's got a new motor too. The guy who can drive a Mini into the top ten has bought the ex-Egglestone brothers GrpN Astra. He only got it 2 weeks ago so this is some learning curve this weekend. Another driver in a strange motor is Gordon Boyd who has bought Monty Person's Nova since the promised Escort is still in bits! And it was nice to see Mark Wagstaff, the '92 Philips Tour of Mull winner back on the island. He will be rallying a garden shed, oops sorry, it's a rather old Sunbeam shell which was hastily purloined in which to fit Anda Campbell's greasy bits – since the tin-worm had been making a meal of Campbell's old bodyshell! Still, it's the effort that counts, not the looks.

Behind the scenes of this 29th Philips Tour the sponsors have been hard at work and it really is encouraging in these less enlightened business times to experience such enthusiasm. Using their powers of influence they persuaded Vodafone to commission a new cellular mast 6 months ahead of schedule to help improve communications on the island. For remember, good communications are vital for improved safety. Which brings us to the moral of this first tale.Think safe, drive safe and stay safe. So if you meet any of the Philips people, David Jordan, Ash Dasgupta or Mark Dale, buy them a drink from me – and make sure they come back for the 30th Philips Tour of Mull.The Rally starts to-night at 7:00 pm from the car park in Tobermory alongside the Philips Exhibition unit, but if you're intending to spectate on the stages, remember to get there early, before the Road Closure Orders come into effect, do as the Marshals tell you, and take care out there! 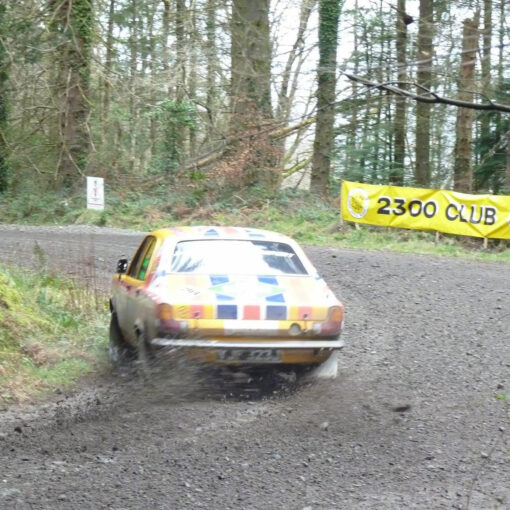