The 36th Tunnock’s Tour of Mull Rally is not finished with the front runners yet. Billy Bird has rolled the Lancer in Loch Scridain and recovery services were called to the scene to clear the road, but James MacGillivray is still in charge at the front. Eddie O’Donnell is still struggling with thro ttle cable problems and that has helped Denis Biggerstaff who has powered past into second place and John Cope is now on a mission and has closed the gap to Eddie: “I had double shredded wheat for breakfast” said John. Following Billy’s accident the stage was stopped till his car was cleared so some of the delayed top seeds were given ‘notional’ stage times and these are reflected in the times above.

More news from the front, 1600 class leader Ian Chadwick is out. He’s put the Peugeot off in Mishnish Lochs and it took over an hour to get out of the stage! Ian Grubb then took over the class lead, but he’s in trouble too. He’s burst the Proflex rear suspension and has no spares. The car is bottoming out badly especially over the yumps and he’s going to try and fit standard suspension units at service before tonight’s run.

On the first stage today, Paul Daniel had an alternator problem but was unable to re -fit the sumpguard after changing the unit, and Bulletin Bob noticed a trail of oil when he left the Contro l here aboveTobermory … Mike Russell is overheating at the start of each stage and is running out of water. That means the anti -lag system is not working but he’s still going …Derek Carless has had electrical problems, the car cutting out dead twice this afternoon and then firing up again after a few moments …Brian Ottridge had a puncture on the first stage today …Having to push start the car at each stage start is Chris Paton and Dave Cabena after the starter motor packed up … Robert Mathieson had a big spin on Calgary and slid off and had to drive 50 mtrs over the rough to regain the road … Duggie Ingram is driving the Mini without the clutch after it failed … Alan McLaughlin lost time in Mishnish with a front wheel puncture … Dave Barritt is losing gears and oil in the Chevette … Bruce Hosie is getting bad vibrations through the steering wheel and the front n/s wheel is wobbling like mad … Paul Marshall is also having gearbox problems, can’t get 2nd or 3rd … Jim McDowall is going well but the radiator is losing water from the Lotus Avenger … and get this, 3 new stage records today, O’Donnell got one on the Hill Road and Cope got two on Calgary and Mishnish, so the pace is fierce out there.

Following his accident on SS8, George Grieve has been airlifted to Glasgow for a check-up but appears fine. Methinks this is just his way of getting off the island first class without having to pay for it! Co -driver Lee Carter is OK and has been left behind to tidy up. Oh and by the way, Matthew Wilson was leading Rally I reland earlier this afternoon from Eamon Boland! And some more good news.

P.S. If you hear a siren ahead of the rally tonight, that could be The Bulletin Boys delivering copies of MullMurmurs, so get ready for them! Oh and by the way, remember that Posh Nosh behind the Post Office in Tob Main Street will be open into the early hours tonight to provide hot drinks and sustenance. 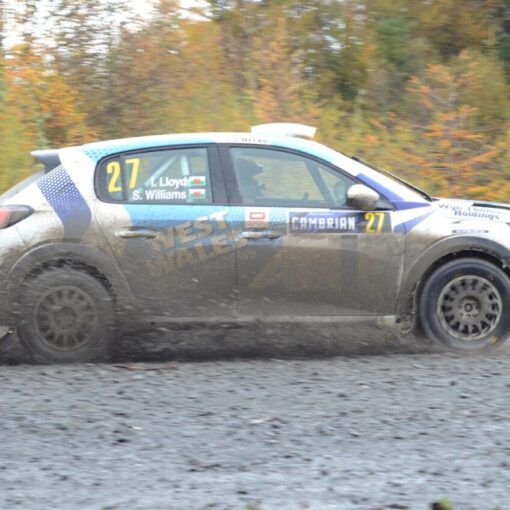 Ioan Lloyd brought the curtain down on his debut season in the BRC with a performance full of promise. The Cambrian Rally, […]