You can find the list of items available to order, kindly hosted by MotorDrive at their website, here: MOTORDRIVE-TOUR-OF-MULL-CLOTHING

Here is the full report on the 2300 Club Andy Mort Tour, which will be published imminently in the SD34 Spotlight E-magazine. […]

Well, that’s Scrutineering over for another year. The Scroots have shoogled, tyre-kicked, checked and measured everything mechanical, but who’s checking the crews. There are some bleary eyed blokes amongst them after a few all-nighters to get ready for today.

Shortly the main street will be cleared for the 40th Tunnock’s Tour of Mull to blast off into tyre melting, gut wrenching action, so a final word of warning to all you spectators. Take care out there and if you don’t use your own common sense, used somebody else’s. Park sensibly, drive carefully and spectate responsibly.

Back at Scrutineering I had to laugh at Grum Willcock’s idea of ‘international’ rallying. He broke a brake disc on the Opel Manta at the Lindisfarne last month and needed to replace them. So he fitted a pair of German Merc S class discs to the front for the princely sum of 66 quid. And they go well with his Jaguar front callipers, Volvo rear callipers, Vauxhall engine, Ford gearbox, Opel Manta body and a back axle sourced in the USA from a Jeep ‘thingy’ (he couldn’t remember what) when the £ was weak against the $. That’s what I call resourceful rallying on a budget.

Former Scottish Tarmac Champ, Ricky Wheeler was last over here 13 years ago and is hoping for better luck. He was off for 12 minutes in the first stage and set a top 20 time on the last, so even then, progress was in the right direction. Ian Chadwick is back for more. The 106 was new for last year and he’s done 3 events since then. He was actually on course for a 10th place o/a on the Munster Stages earlier this year till he started catching cars, so let’s hope he’s not catching more tonight.

Reay MacKay was looking a bit apprehensive. He’s not really done a proper tarmac event before and he’s never driven the Metro on anything but gravel tyres, so the Snowman Rally winner will be tackling the unknown tonight. He’s very professional though, I saw him taking his racing ovies out of an Asda carrier bag! John Morrison is hoping to improve on his highest placed newcomer award on the ’05 Mull. He was running car 41 then and is running 41 again this year. Is that a good omen?

A welcome sight at Scrutinising was Steve Davies. He’s got a new engine: “Half of the old one is still lying scattered over Ensay Steps from last year,” he quipped. It’s hard to believe ‘Sid the Parrot’ Fleming contested his 1st Mull in a Mini in ’75, but here he is back in a Fiesta ST: “We’re calling it the Corgi Car – it’s so quiet and small inside compared with the MkIIs I’ve been running”. And sitting alongside is Fergus Loudon – from Tunnock’s –  so doff your cap, tug your forelock and call him sir. I will.

Curly Haigh has fitted new seats to his MkI, you know the kind, the fancy ones with the big wings round the crash helmet position, but they’re so wide he nearly can’t get the Escort doors shut. Still it’s better than his recce car. It had to get towed on to the ferry! Matthew Tarbutt’s Nova appeared at Scrooting with a large lip-smacker shape on both driver and co-driver doors, saying Holly with three ‘xxx’s. Apparently this has come from co-driver’s Joff Haigh’s best friend’s wife who reckons this is a good luck ritual – funny folk, wimmen, eh? Duggie Ingram got a 4th in class on last month’s Pendragon with the Mini, and that was despite a ‘dink’ in the rear end when he slid wide on a corner and hit a roadside rock. The car was new for last year and suffered teething problems so it should be fit for tonight.

Alan McLaughlin’s Ford Puma looks rather different to the way it finished the 2007 Mull when he parked it upside down on the beach! He got the class win last year, so progress is in the right direction. Callum Bendall’s Ford Ka may look like Ford’s smallest machine, but it’s got a 1400 Puma engine on throttle bodies under the bonnet. Sort of like a real Ka, but after a night on the vodka and red bull. After breaking a driveshaft at Kames, three months back, David Johnston has splashed out on two brand new ones for the Golf – after checking and finding that his spares were twisted!

Euan MacKay has been busy this week. The wee Peugeot finished last week’s Colin McRae Stages with bent rear panels, arches, tank guard and a burst exhaust, so a lot of midnight oil was burnt, but when he took the big hammer to the tank guard at 2.00 am in the morning he got a severial verbal roasting from his Mum who was violently awakened from her peaceful slumbers by this hammer wielding nutter. Still he got the job done, and he’s here. Donald Brown has forsaken the Sunbeam for a Saxo: “I’ve driven a FWD car before only once – badly!” he said. Let’s see what tonight brings.

Dave Thomas is back in a ‘brand new’ 40 year old Mini Clubman. Mind you I was surprised to see him. He is half way round a world tour in a Mini van. He’d done all the provinces of Canada and after this ‘holiday’ on Mull he’s going to tackle Russia – I wonder if he’s told the Russians yet?

Shaun Sinclair is back, after crashing out last year when a brake pipe burst. But he finished 5th o/a in the Scottish Rally Championship this year, so the car should be right for this. It’s good to see young Alex Brown out in John MacCrone’s 205 Championship winning car, this was to thank him for all his help this past year. Pierre Newton’s 205 looks tidy and tasty. Built in 2005 he finished Mull that year and finished again in ’06 but when he couldn’t get an entry in 07 and 08 he did two airfield events and crashed in both. The moral of this story is, don’t do airfields unless you fly a plane!

I had to laugh, Eddie O’Donnell Jnt appeared at Scrooting with a smart jacket emblazoned ‘with the word AutoFashion’ Well, I’m sorry but the words ‘O’Donnel’ and ‘Fashion’ sit as comfortably together as a hedgehog at a balloon party, or a fish supper at an anorexics’ night out. But the car has a new sequential shift 5 spd box and it was ready before Scrooting closed so that’s a positive. Third generation Steven O’Donnell had his Mk1 there after 4 years of getting it ready. He bought the car in 2005 and it was just about finished when he got to the Distillery – typical O’Donnell time keeping!

John Easson Scholarship winner Mark McCulloch was another burning the midnight oil this past week. He managed to shorten the Corsa by two inches on one side on last weekend’s McRae but with only one portapower tool he was struggling. So he wedged the car in the garage on one side with fence posts and attacked the other side of the bodyshell with the tool. Result? Perfection.

It was nice to see Paul Darlington back with the V4 Saab. Like the rally it is 40 years old. He did the rally in 2004 and then got married in 2005 – so he missed the rally that year. I wonder why. Kevin Charles has watched Mull a few times, but this is his first behind the wheel. He did the Jim Clark National earlier in the year in the Fiesta but snapped a driveshaft on the last stage, although he finished. That’s what’s needed for Mull too. Never give up. And didn’t David Holland’s MkII look grand. The Palletforce MkII has done three Mulls, and one event in Anglesey, which is somewhere near Englandshire apparently.

Speaking of professional preparation, I had to laugh when Matthew Fox came through in the wee Peugeot. He had his fag packet velcro’d to the door panel. It was beautifully done, stuck to the door. Apparently at the end of the longer stages, his co-driver can’t pass him a fag quick enough to help soothe his tattered nerves. What some folk will put themselves through for their sport!

And doesn’t it just make you feel old. Young Alasdair MacCrone and Robbie Duncan appeared at Scrooting with the Bear Cubs Nova. They both look as though they are just out of school. Young? I think they shave with Johnsons cotton wool buds! Just jealous, that’s me.

By the way, look out for Bulletin Bill in the MullMurmurs distribution Subaru Impreza tonight. He will be appearing at various locations around the route – hopefully.

Now, if you are going out drinking and driving tonight, just make sure it’s nothing stronger than Irn Bru, and if you fancy a snack there’s only one name on everyone’s lips – a Tunnock’s caramel wafer a day, helps you pace, race and rally away. OK, so what did you expect? Poetry? 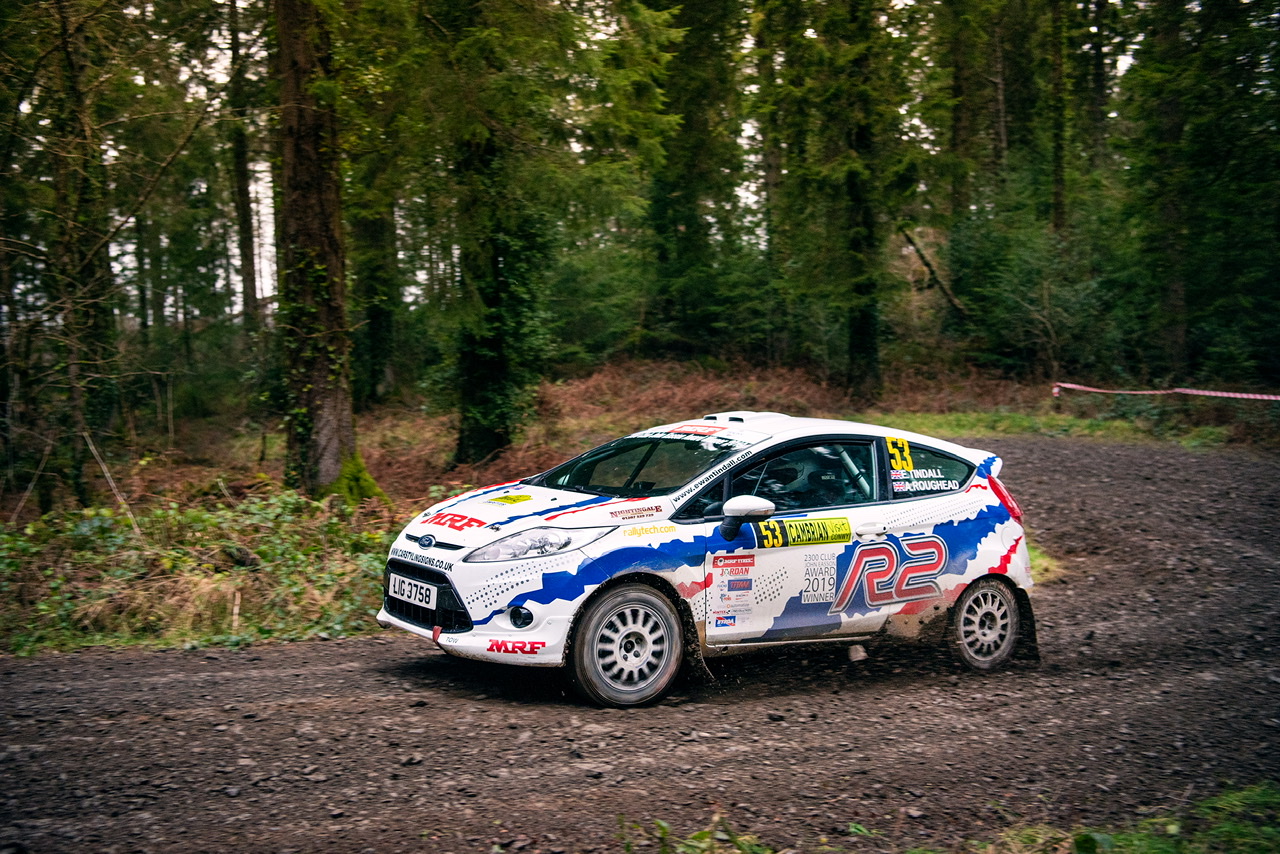 EWAN Tindall will be out to prove a point when he competes on this weekend’s Malcolm Wilson Rally. The talented youngster has […]