This year’s Andy Mort Tour is gearing up to be the best yet.

Thanks to the legendary Paddy Hopkirk appearing as the guest of honour, the 2300 Club of Blackburn has seen a surge of interest in the one-day touring assembly, with the original entry limit of 50 cars now extended to 60 .

And the entry list reads like a who’s who of northern motorsport, with a host of names from past and present.

Hopkirk will have the pleasure of flagging of his own car, with 2015 HRCR champion Steve Entwistle taking the wheel of Paddy’s famous Pirelli Marathon-winning Mini Cooper S, 6 EMO, starting at car one.

Geoff Maine and Phil Howarth are back for a third consecutive outing on the Andy Mort Tour – each time in a different car. Both are members of Liverpool Motor Club, competing and officiating.

One of East Lancashire’s most well-known stage rally drivers, Nigel Worswick, is swapping his Ford Escort WRC for a road-going version and starts at seven.

Right behind him is another well-known historic rally crew, Geoff Awde and Peter Ward in an MGB and rounding off the top ten is Ian Harrison, well-known for his exploits in the British Rally Championship in the 1980’s driving a Vauxhall Astra.

Bill Honeywell has a long and illustrious history in rallying, making his debut on the Tour of Mull in 1971. “I’ve done more road rallies than I care to count, and enjoying a long-standing partnership with John Meadows resulting in finishing ninth overall on the 1983 Motoring News Championship.” he said. “When money was tight, I navigated as sat alongside my dad Roy, Mark Harrison, Brian Harper, and Dave Calvert. I now spend much of my time cycling to raise money for cancer charities. I cycled 4,500 miles in one go around Britain in 2011 and climbed all 542 fells in the Lakes. So if anyone wants to donate a few quid to help the fight against cancer, I’ll gladly relieve them of it!”

Starting at car 16 Lisa and Jim Maguire are looking forward to ‘playing out’ in their BMW Cooper S. Lisa used to navigate on rallies but the pair are now officials of Buccaneer Motor Sport Club. Roger and Pamela Broom marshalled on the Tour of Mull for over 25 years and counted themselves good friends with Andy Mort. “He was a great guy and when the 2300 Club organised the first Andy Mort Tour, we just knew we had to be part of it to show support to Andy’s family and friends – and the 2300 Club.” said Roger. They will start at car 24 in a Skoda Citigo.

Former circuit racer Dave Rose is bringing along a car with the same name – a 1989 Mini Rose, one of 500 in Pink White to celebrate 30 years of the Mini.

Former Lancashire Telegraph motorsport writer Jeff Hanson is making his Tour debut with his Mazda MX5. “I covered the sport in the 1980’s with the likes of Hannu Mikkola, Ari Vatanen, Jimmy McRae- and some bloke called Ian Grindrod!” said Jeff. “I tried a few regularities myself, although they were more like irregularities, and was once given a very dubious ‘Crap But Tried’ award by Springhill Car Club, which consisted of a melted conrod.” “My son-in-law Stephen Greenwood is navigating, and his claim to fame is that he once beat Lewis Hamilton is a junior karting race when they were both kids!”

And it’s going to be interesting inside the cabin of John Pinder and David Rowe’s Renault Clio.
“We’re both drivers, so that should be interesting,” said David. “We both rallied back in the late 1970’s and early 1980’s in stage and road rallies. More recently, John has been helping his son Luke Pinder in several BRC campaigns. We are both looking forward to the tour and hopefully a targa rally or two.” 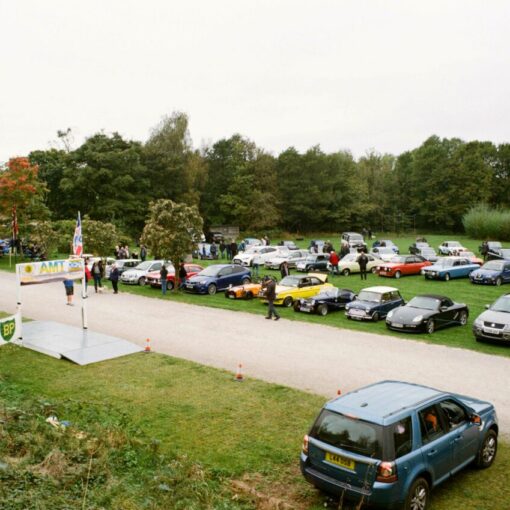 Wellhullawrerrchinasanhowzyertastebudstingling? It’s a new year and a new era, and we bid a warm welcome to the masters of culinary tastiness, Messrs Cumnock’s of Uddingston, manufacturers of Scotland’s ‘other national food’. So warm greetings to one and 2300 Car Club’s new sponsors to the 36th Tunnock’s Tour of Mull.

As ever, the 36th Tour ‘officially’ got underway last night in the Aros Hall when that helluva nice big chap John Fife hosted the Tunnock’s Forum. There were a few bruised hairdos after the usual ‘fling tee-shirt’ competition with additional prizes courtesy of Nissan UK, Yokohama Tyres, AP Racing and Browns of Tobermory. Guests included last year’s winner Calum Duffy, co – driver Stan Quirk and former international rally driver, Andrew Wood who looks after Dunlop Tyres this side of the border. By heck we had a good crack last night and put the world to rights!

One thought on “Any Mort Tour Update”