To save any confusion at signing on and any embarrasing moments at results and Prizegiving, please double check your classes & eligilibilities for Awards. Any changes may be made on your entry details by clicking on the "Edit 2007 Entry" in the left hand user menu.

CLASSES
The event will have classes as follows:

Cars with forced induction (i.e. Turbochargers and / or Superchargers) will have their capacity increased by 70% for classification purposes.

Best Performance by a Crew Resident in Lancashire
Driver     – Evening Telegraph Trophy.
Navigator – Liam Robinson Memorial Trophy.
Only open to crews who are current residents in the Red Rose County

Best Performance by a Crew Resident in Yorkshire
Driver  – The White Rose Trophy .
Navigator – Doug Mault Trophy.
Only open to crews who are current residents in the White Rose County

Newcomer Category
The MacKay's Garage Trophy
Only  open to crews, both of which are competing in the Tour of Mull for the first time

The Shell Worthy Performance Award
This is a discretionary award for which suggestions are warmly invited, after the event.

Spirit of the Rally Award
The Duart Trophy.
This is a discretionary award for which suggestions are warmly invited, after the event.

Team Awards
Engraved awards to drivers and navigators in the winning team of three cars.
Entries may be made at Signing On.

Service Crew Awards
The Gary Bratt Memorial Trophy + £30 (Graeme Wood) and £30 (Paul Marshall)
This is a discretionary award for which suggestions are warmly invited, after the event.

Services To The Rally Award
The John Easson Memorial Trophy
This is a discretionary award for which suggestions are warmly invited, after the event.

Best Entertainer
The Mallard Trophy to be held for one year.
This is a discretionary award for which suggestions are warmly invited, after the event.

The Last Finisher
The ‘Ultimate’ award.
Everyone has an entry in this one! 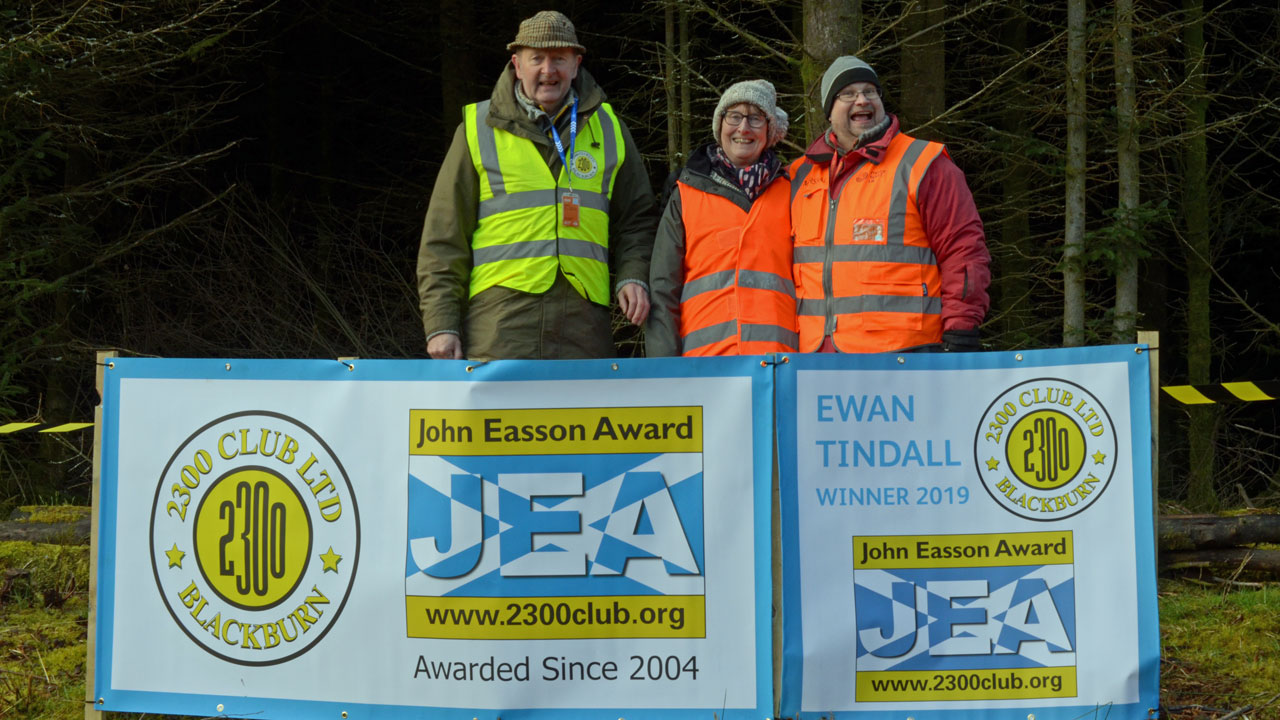 Did you notice? There were no shooting stars over Mull last night. Nope, they were all at ground level. That was one of the most compelling duels we have seen on this island in many a year. If folk ever ask you what makes the Tunnock’s Tour of Mull ‘the best rally in the world’, just tell them about last night.

Going into the final Leg of 5 stages, ‘MacKinnon The Younger’ and Daniel Barritt had 25 seconds in hand over Calum and Iain Duffy. There were 56 miles of stages in that final group. For Calum, that meant less than half a second a mile to make up. No problem, eh? Let battle commence. And what a fight that turned out to be.

MacKinnon’s yellow Subaru was like a comet, blazing a path up Loch Tuath and round Calgary Bay. He stopped the clocks 22 seconds sooner than his Dad did 2 years ago. A new record. Then came Calum, the comet scorching its own line over the tarmac. He broke the record too, but by ‘only’ 14 seconds.

Mishnish Lochs did neither of them any favours. According to James MacGillivray, “that was just about the slippiest stage he had ever driven”. No records, but MacKinnon took another 7 seconds out of a disconsolate Duffy. “My tyres are like jelly” said Calum, “I was hoping for more grip when it was colder.”

The gap was now 40 seconds with 3 stages to go. Now, sensible folks like you and me might have left it at that, but note the use of the word ‘sensible’ here. Calum took 5 back from Paul on Loch Scridain. Paul equalled the record on Gribun and took 3 back from Calum. There were now 38 seconds between them and 14 miles of tarmac, which was originally laid down by a drunk, dribbling asphalt out of the back end of a tipper, while driving over what became the Hill Road and down Glen Bellart. That isn’t a road, it’s wishful thinking.

Surely not? Well those two went at it like a pair of ferocious Scottish midgies wanting a big bite out of the same fat bloke. And then it happened. A patch of mud on the road, locked up brakes, and off. Disaster. It was all over. Maybe. Paul locked the diffs and managed to reverse out, but Calum’s lights were only too visible and catching. “That was some trip down the last 10 miles of the Glen, I’ll tell you,” said Paul, “the bumper was hanging off it, I don’t know what else might have been wrong, but I just had to go for it.” And go he did.

At the finish, Calum said, “He drove well, you can’t take that away from him.” So how hard was Calum trying? He pointed to his rear tyres. The whole tread moulding was starting to separate from the tyre casing. You could put your fingers in the gaps.

By comparison, the pace of Willie Bonniwell, James MacGillivray and Tristan Pye was almost sedate in 3rd, 4th and 5th, but for ‘drive of the rally’, what about young Kris Hall in 6th place? I almost felt sorry for that poor wee Ford Fiesta. Tony Bardy, David Miller, Tugs Sherrington and Wayne Sisson rounded off the top ten but what of the others?

John Cope was in the hunt for top honours till that last mad dash across the island last night, and he too fell victim to a patch of gravel, but unlike MacKinnon, there was no way out. Daniel Harper too was in the hunt for honours, but clipped a rock in Gribun and almost tore the wheel off. Eddie O’Donnell finished the rally with bits of his brother-in-law’s gearbox inside his own, but that prompts the question, does his brother in law know? He does now! Dougi Hall parked the Lancer in a ditch and Paul Kirtley blew an exhaust manifold. Denis Biggerstaff had punctures and serious brake problems and John Swinscoe had to stop in stage and change a puncture too.

John Cressey broke a gearbox, although he tried to blame his navigator Stan Quirk, “He stutters a lot for a co-driver!”

In the classes, Iain ‘Ogg’ MacKenzie’s 11th place overall was stunning too for a wee Peugeot 106, but who knows where he might have finished if not for his co-driving Dad “He would have gone quicker – if I had let him!” Second in class B was the equally impressive John MacCrone in 13th place overall and if that is not testament to the value of the Bear Cubs and Steve Davies then I don’t know what is. Gaun yersel boys. In the 1400 class, Alan Mclaughlin in the Ford Puma took the honours from Donald Brown in the Suzuki Swift engined Sunbeam.

And so as the 39th Tunnock’s Tour of Mull Rally draws to a formal close we must once again thank all of the guid fowks of Mull for their patience and hospitality during this annual invasion of nutters, speed freaks and rally fanatics. Our marshals too are wonderful people. Without them there wouldn’t be a rally. The Cooncil too, as ever, have been supportive and helpful and thanks too, to John K Philips for the loan of their truck to bring the rally to Mull. As ever, the Polis were efficient and very busy, perhaps too busy at times. And our grateful thanks to, to Tunnock’s for their own tastebud tickling, carameliciously scrumptious contributions to the Scottish diet. It’s what makes our weather bearable!

And you know what? One of the best bits of the rally? At the rally finish in the early hours of Sunday morning, we all got a Tunnock’s Scotch Pie. By Goad it wiz fierce. A hot best-mutton pie is just the thing to set the seal on a perfect event, just don’t tell the wife I had a pie. She’ll kill me.

Oh, and by the way, don’t be fooled for a minute thinking that was a full moon last night. Nope, somebody was up there with a big torch taking an interest in everything we were up to down here. Thanks Brian, from all of us. 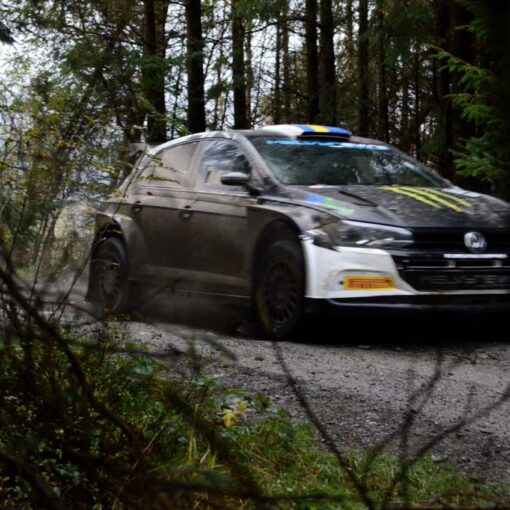 The 2300 Club had a twelve strong-marshalling team for Saturday’s Cambrian Rally.  The weather forecast wasn’t great and proved itself when we […]