The Scrutinatorising is almost over for this year with folk starting to get excited ahead of to-night. But a word of caution to all would-be spectators, please do as the Marshals advise and instruct, not only for your own personal safety but to ensure the safe running of the rally. So pick your spot carefully, park sensibly and get there in plenty of time. And make sure you’ve got a programme so you know who you are watching!

On that very point, you won’t mistake car 45. It’s a Darrian. It’s got a 2.5 Mill ington in it (to those in the know, no explanation needed – to those who don’t, stand well clear, this thing should have a blue touch paper and a government warning!). And it’s also Ashley Field’s first time on the island with it. So what do I think? Tupperware boxes should be used for keeping sandwiches, not for sticking big engines in and driving them!

As ever John Swinscoe’s car is a work of automotive art, the first EVO9 in the country, but he’s not sure how it will go. Apparently, the electrics are nothing like the EVO8, and GEMS have set it up as best they can based on experience – there’s no such thing as a workshop manual with these things. Built to a strict budget and every bit as nice as the big cars is Pierre Newton’s (his Mum’s French) wee Peugeot 1.9. He had been servicing on this event for 15 years for folk like Dave Hopwood and decided it was time to do it himself, but took 2 years to build the car.

Damien Hagan is another looking forward to tonight. The man from Monaghan is one of a three ca r team from Ireland along with Jim McKenna and Gerry Cassidy. More used to the Irish tarmac of home, Damien says this place has a bit of everything, tight and twisty, and top gear high speed stuff. Linda Brown is obviously taking her rallying seriously, she has a lipstick holder bolted to the roll cage. Carol McCrone is chuffed to bits. She was on the reserve list till she got a call on Monday to say she had a start and then it was a rush to get the Mini ready. Paul Miller is back with the Sierra after a big accident on Calgary Bay last year. The whole thing has been rebuilt including the greasy bits. Lewis Gallagher is back for more and it’s worth being nice to him, his Mum Jeanette and Jane McLean own the award winning chippy on Tobermory Pier! He’s also got a new MI16 engine in the Peugeot but says he’s worried about noises from inside.

Co-driver turned driver John Bennie turned up in his latest rally weapon. 8 weeks ago it was a low slung boy racer cruiser but in the past 5 weeks has been turned into a rally car – apart from the boy racer exhaust. It’s so big you could walk up inside it and do a de-coke on the cylinder head from the inside. Stephen Thompson is expecting to go quicker this year. It’s the same car but Eddie O’Donnel Snr co-drove for him on his first event, but this time his new co-driver Rhoda McKinnon s abut quarter of the previous incumbent’s weight! Light means flight.

Donald brown’s got a new car but it’s no ordinary Nova. It’s got a 2 litre lump up the front end driving a back axle. Gr ant ‘Sid the Parrot’ Fleming has hired a Rally Xtreme Escort which once upon a time was driven by a certain Russell Brookes (HHJ 702N). According to owner Grant Shand he’s going to repaint it in its original colours and then use it himself on the Roger Albert Rally next month, that’s provided Sid is sensible, which he should be since he’s got the eminently sensible Fergus Loudon (pretty high up in Tunnock’s) sitting alongside in the co-driver’s seat.
Rod Brereton is co-driving for Graham Howard. The first time they won a trophy together was in a Talbot Samba, but in between times Rod took the wrong ‘sensible’ pills and bought a Renault Clio for rallying. It’s still not ready but on Tuesday night, his quiz in the Mishnish raised £312 for the RNLI. Nice one Rod. Dave Barritt has finally pensioned off the Opel Manta and replaced it with a shell he found in a shed. Trouble is, it’s not a Manta any more it’s a Chevette.

And since I started with Scrutinators let me finish on a true story regarding these august upholders of the regulations. Big Chief Roger nearly didn’t pass John Cockburn’s fearsome looking TomCat device because co -driver George wasn’t wearing her tartan miniskirt from last year (yes, that’s right George is a she). Apparently that was remedied in such a fashion that it brought a rosy glow to the Chief Scroot’s cheeks – and no, it had nowt to do the whisky fumes at all. Ask me later!

P.S. Could the crew of Car 160 please return to Scrutineering because your Log Book has got mixed up with someone else’s! 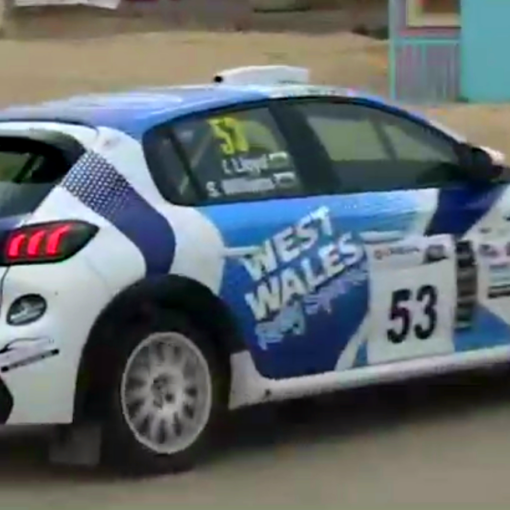 IOAN Lloyd has got his British Rally Championship off to flying start on the Corbeau Seats Stages in Clacton. The 19-year-old John […]

On the 19th June this year motor sport and the Tour of Mull lost a great friend, Jack Neal, Deputy Chief and Club Scrutineer for over 20 years. Competitors will remember him for his ready good humour, his helpfulness, easy of address and thoroughness to do a good job.

OK, not quite true, but now we have your attention, the 2300 Club will pay for your ferry and make a contribution towards the cost of your fuel – if you help us out! So if you are thinking of coming to the island to spectate or are coming with a competitor and would like to join in, why not come and marshal instead. There are lots of jobs to suit all abilities.

Get closer to the action, and feel an important part of the weekend.