Following on from the successful Janet Lancaster Memorial Run in October 2015, the 2300 Club are planning a similar event in memory of former club member Andy Mort.

The event will be called the Andy Mort Tour and will take place on the 22nd October 2016 and is a gentle run around Lancashire / Yorkshire. It is not a timed or competitive event and is classed by the MSA as a ‘Touring Assembly’ – for the layman that is code ‘for a leisurely scenic run in the country on proper Tarmac roads.’ … so no need for roll cages, sump guards, etc! There will be prizes for the correct route as well as best turned out car etc etc. The navigation is via Tulips from a supplied Road Book.

The Entry List and Competitor’s Final Instructions are now available. In the meantime a few preliminary details to whet your appetite are here:

To round off the day a few ‘driving tests’ will be performed at the finish venue. 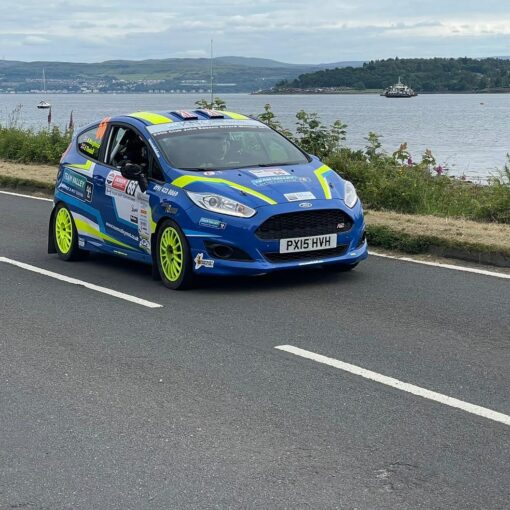 Ewan Tindall shrugged off his 12-month absence from the sport to score a superb hat-trick of wins on the Argyll Rally. A […]

This was the big one, the 23 miler Loch Tuath/Calgary Bay adrenaline charge. And like something out the ‘Charge of the Dark Brigade’ Neil MacKinnon sped down the valley and round the bay stopping the clocks on 20 mins 26 seconds – you couldn’t do it quicker even if strapped to an Exocet, but there is still cause for concern in the McKinstry camp. The gearbox Neil is using will have to spared, no full rev changes, there’s a long way to go. Calum Duffy is having to be careful too, 2nd gear is beginning to ‘crunch’. Paul Kirtley struck something and knocked the tracking out so the Subaru is a handful and according to Tony Cope brother John thought he was a tractor driver for 400 yards in Calgary – but they got away with it.

Up to an excellent 9th overall is yet another Muileach, Cameron MacLean (41), but he admitted to backing off a bit this afternoon when he saw Doug Weir’s accident … Tim Stell (40) was troubled with a sticking throttle which made his anti-lag interesting … Tristan Pye (36) had a puncture and the car’s not handling too well since … Pat Johnson (23) is troubled with his brakes, they keep snatching the left front and he thinks something is broken … Chris Chadwick (34) struggled through Calgary and the Lochs, the co-driver was changing gear while Ian was steering with one hand, and operating the throttle by the other hand out of the window using a boot lace. Oh, and by the way, some of our ‘foreign’ readers wonder what a ‘midge on a squib’ is, a phrase I used to describe Chadwick’s progress in an earlier bulletin. A ‘midge’ is a small biting gnat and a ‘squib’ is a firework. OK? … Alan Gardiner’s intercom has gone … Tugs Sherrington (35) is having steering problems and Curly Haigh (44) reckons he was setting some fantastic times – for this rally 10 years ago … class leading Mike Storrar (38) is having to hold the door shut with a bungee as the lock has failed and he’s annoyed – the 1600cc Anglia is ‘only just’ out of warranty by some 30 odd years … the politically incorrect Stuart McQueen (28) was spotted having a fly fag at the end of Calgary, just to calm his nerves …  ex Land Rover pilot John Cockburn started the rally gently by not using the anti-lag first time out in a Subaru, but used it throughout the second Leg, so I wonder what he’ll do tonight – use the throttle maybe? … Brian MacLeod (71) has a leaking core plug … and Steve Davies (51) got a fright when both throttle cables broke simultaneously, and then the sumpguard fell off … and Chris Woodcock (54) is under serious pressure, he’s driving Harry Hockly’s Proton and he’s been told to bring it back in one piece – and he’s leading the 1400 class, so no pressure then …and Alistair Willis (110) has returned to Scotland to rally his old Nova run by Andrew Wood. He returned from Bucharest in Rumania where he runs a sandwich factory! … and here is a true tale, would I tell a fib? – Fooey the Fireman (118) went on fire! He was driving Alan Gardner’s old MkI on the basis that if he fixed it he could use it on Mull so the part-time fireman and full time mechanic at MacKay’s Garage was going well till the boot went on fire. It was spotted by other folk and Robert Mathieson (57) pulled over to help him with the merry blaze. But it was only the electrics and the paint which suffered, but I bet his mates will give him a ribbing next time he goes to work.

If you would like to see your photos published in the gallery, please contact us (webmaster@2300club.org). If it's just a handful, then […]