2300 Club are pleased to announce the winner of the 2018 John Easson Award. Lincolnshire driver George Lepley was chosen as the winner of this year’s prestigious award which is worth a total prize fund of £6,000.

This year we had a total of 17 Candidates for the award consisting of 15 Drivers and 2 Co-Drivers. The JEA subcommittee met on the 14th November to review the applications and pick our 3 finalists.

Every year the team are faced with a difficult task to choose the eventual winner, and this year was no exception, all 3 candidates gave a good account of themselves on why they should receive the coveted JEA.

However one candidate stood out from the other two and it was a unanimous decision by the panel to award the prize to George Lepley.

George first applied for the JEA in 2014 and had made it through to the final on two previous occasions but narrowly missed out on the prize, but he persevered and came back for yet another attempt at winning the JEA, and his drive and enthusiasm shined through and he certainly impressed the whole team enough to take the prize this year.

We all agreed we think he will be a good ambassador to carry the JEA forward. 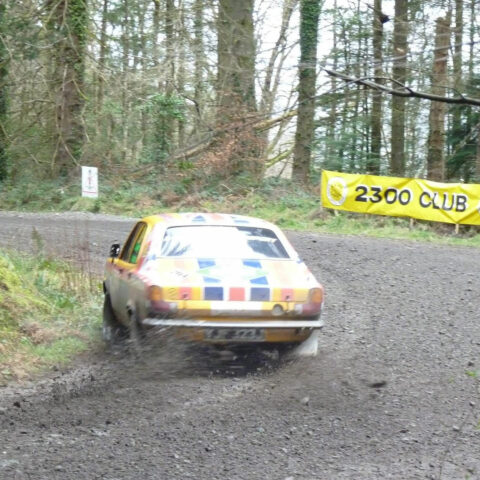 The Club Champion
It was late November 2018 when it was announced that Lincolnshire’s junior rally ace George Lepley had won the 2300Club’s 2018 John Easson Award. After entering the competition for 4 years his persistence had finally paid off. George had shown some serious promise, having won the BTRDA 2wd Championship for the 2018 season. 2300Club members, not to mention Award scheme manager Allan Durham were all excited to see what George could bring for the 2019 season.
The new Award winner had planned to take part in the British Rally Championship 2wd with all things in place. Exciting times ahead for 2019 with the John Easson Award covering George’s entry fees upto a maximum of £5,000, with a bonus of £1,000 if he wins his Championship. This would be a big help to George’s finances. Unfortunately by mid January his plans had fallen through with his main sponsor pulling out, all rally plans were shelved. It was also George’s final year in university so he announced with great sadness that he would not be rallying for the first half of the year and would be concentrating on his degree. Although the 2300club disappointed, understood his predicament, and would support him later in the year.

However just two weeks later, at the beginning of February another door opened, a very different opportunity came about by The BTRDA Championship headline sponsor Baz Jordan. The loan for one event the Cambrian Rally. A historic spec 8 valve Hillman Avenger was offered. George grabbed this opportunity with both hands.
As it happened 2300club were marshalling on the Cambrian Rally with a strong turn out of 13 Marshalls, all dying to see this historic Avenger in action in George’s capable hands. Positioned with the club’s historic 40 year old banner proudly sited on a decent bend on the stage all our marshalls commenting on George’s pace, truly outstanding, looked as fast as the modern cars. But that is because it was, the results that day tell the story!
1st overall 2wd BTRDA silver star (includes modern 2wd)
1st overall historic cup
1st overall junior driver
So beating modern machinery with the historic car, was it a fluke or a sign of things to come?
Mr Jordan more than happy with the results on the cambrian, left the avenger with George for the next event. 2 weeks later was the Malcolm Wilson Rally based in Cumbria. The 2nd round of the BTRDA rally would have the usual early March trecherous conditions, proving a difficult rally for the Avenger. George had a few issues in stages 7&8 which put him just outside the top 10. Still an incredible result in such bad conditions. Beating many modern 4wd cars.
11th overall (in the thick of the modern 4wd machinery)
1st 2wd silver star
1st overall historic cup
Best presented car at scrutineering.
So another fantastic result, a theme is emerging with George an the Avenger gelling well.
April brought the Rallynuts Stages Rally in mid wales, still with the Avenger didnt quite go to plan. Time was lost due to a differential problem, so george had to work hard to stay in the mix.
But looking at the results you would never know.
1st 2wd silver star
1st overall historic cup
1st overall junior driver
The Plains Rally was next up in May. Still in the Avenger, as there was a chance of Championship win, If these results keep coming. George lost time in stage 2 with a puncture but still managed 10th overall again against modern 4wd machinery. Brilliant result going into the mid season break.
George found himself on the front cover of UK Rally Scene magazine, a mid season highlight.
It was also time to finish that Chemical Engineering Degree at the University of Nottingham with you guessed it, another first.
Leading the Championship standings for most classes, it was back to business in the Nicky Grist Stages Rally, again in Wales. This where the BTRDA silver star(2wd) and the Historic cup Championships were won after just five of the seven rounds.
An incredible season from the dissapointment in January to elation in July not only was George Lepley the star driver, he also made the little Avenger an unlickley star with fans of its own. George and the Avenger beat all the modern R2 cars, modern high power RWD cars and the best of the historic Escorts and drivers in the country. George commented “this car flies like a bird & entertains like a comedian” only borrowed it for one event! Time to hand it back to a very pleased Baz Jordan. With the Championship won, time to do the last two rounds in 4wd.
Augusts Woodpecker Stages Rally George would compete in a Mitsubishi evo 10 Clubman B13 spec car. Not quite the power of the WRC or R5 cars but very capable.
1st Gold star
2nd Overall
Proving he could not only challenge but beat WRC and R5 cars, setting 3 fastest times on 5 stages with pace , control & smoothness to beat the best drivers in BTRDA.
The final round was septembers Trackrod Rally Yorkshire. Seeded 3rd did prove that George was there to take on the big boys. Finishing the last stage with fastest overall time. Result may have been better with correct tyre choice.
3rd overall
1st B13 (non R5/WRC)
I dont think we will see a season as good as this for a long time. The 2300 club does not have a club champion as it is a club of organisers, but George Lepley showing the 2300club John Easson Award Decals on his cars. Certanly Championed our club 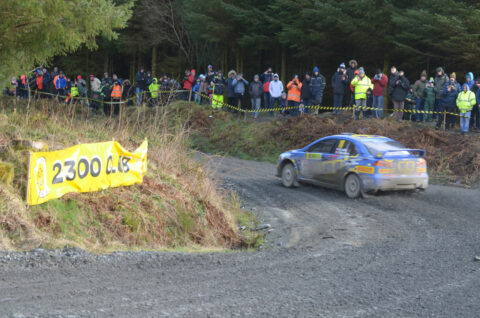 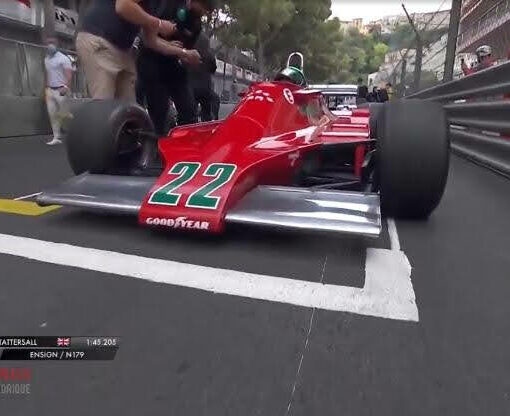