OK, so we got it wrong on the previous bulletin, but we never claimed bulletin writing was an exact science. Neil MacKinnon was actually leading the 31st Philips Tour of Mull Rally after Stage 8 by only 3 seconds from Callum Duffy, but guess who's in front now after Stage 13? The 1998 Tour winner Callum Duffy hit the front over the last loop to hold a slight advantage before night falls once again. MacKinnon's Subaru suffered frontal damage at Torloisk when he skelped a wall and Duffy is struggling with a badly understeering Mitsubishi … Dougi Hall is definitely out following his roll in Mishnish Lochs …and Martin Healer also appears to have gone missing from his top ten position … Stage 13 was delayed due to an accident to top ten runners Steve Smith and Alistair Douglas. Rescue services were called after the Subaru vaulted a wall and landed on the beach … Daniel Harper is going well, but working hard like everyone out there, the rain on the final test was so bad, wipers couldn't cope and drivers couldn't see … Eddie O'Donnell aquaplaned off the road in Gribun and punctured both n/s wheels and bent the rear axle but is still going … Paul Kirtley had the wrong tyres, not half he didn't – slicks on the front! In this weather? … George MacDonald has moved into the top ten even with a half spin in Gribun … Mark Jasper has lost his power steering … Andy Knight wants a surfboard instead of a car … Guess what? The weather folk got it wrong again, they said expect showers. Wrong emphasis,they should have said expect dry spells … PLEA from the heart, John Woodward (34) needs an RS2000-to-Atlas prop-shaft to start to-night's Trophy Rally, can anyone help, call 07879 626666 … And now a word of explanation (no it's not an excuse), in order to bring you these bulletins, myself and 'Bulletin Bill' have to run ahead of the cars and try and get times from co-drivers. That's why we are ahead of the Official Results service at times and that's why the results shown in these bulletins is always clearly labelled provisional, but what the hell if we were perfect you wouldn't love us so much. 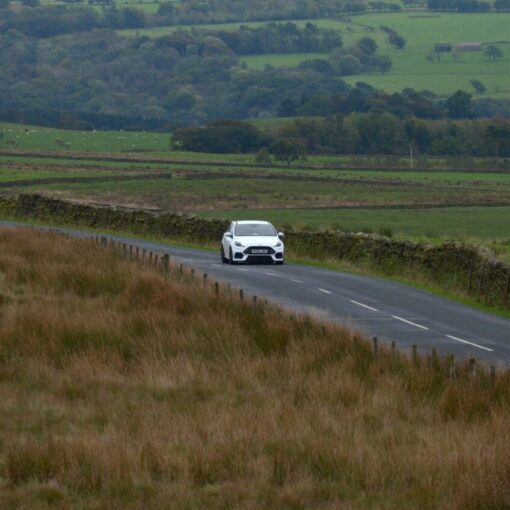 As the 39th Tunnock’s Tour of Mull Rally enters the closing stages all eyes are on the battle at the front. Both Paul MacKinnon and Calum Duffy broke the record on the first stage of the night, the 22 mile Tuath/Calgary blast up the west coast. Paul was 20 secs under his ol’man’s record and Calum was 12 under. By the finish Psaul had no brakes and Calum was struggling for grip even in the near freezing temperatures and his hot rubber.

But it looks as though John Cope’s challenge has come to grief at Torloisk. The Subaru slid off on loose gravel across the road. So how slippy is it? James MacGillivray reckons “Mishnish was about the slippiest stage he had ever driven.” Willie Bonniwell had a fright at the Salen start when the car wouldn’t start and he had 3 minutes to change the plugs. Worse was Daniel Harper, the gear linkage broke on the start of the long one and he lost 2 mins stage fixing it. Tristan Pye smashed his bottoms lights when the Subaru landed nose first after a vicious jump and Kris Hall lost 45 seconds with a front puncture.

Denis Biggerstaff was climbing back up the leaderboard after his double puncture on the first stage, but Ireland’s finest is struggling again. The Subaru is fast running out of brake pads due to a problem with the calipers binding on. Eddie O’Donnell has been slipping back this afternoon. He lost power at one stage when the starter motor battery strap snapped and then later started losing gears in his gearbox. As ever, the enterprising Eddie was off home to borrow bits from a relative’s gearbox to repair his own to make sure he re-starts tonight. Young John MacCrone nearly threw away his 2nd in 1600 class this afternoon when he slid off on Mishnish, but he survived. Paul Miller was in trouble too, he had lost third gear and just as important, he had lost reverse gear! The box was getting noisier by the mile, but he is determined to carry on as far as it will take him. And ‘Fuey the Fireman’ is still going despite having to replace the gearbox and the throttle linkage in the Escort he borrowed from Iain Gardiner. Fuey is better known as Ian Noble, the Automotive Technician (you can’t call him a mechanic these days) who works in that beacon of industrial activity, MacKay’s Garage in Tobermory.

Jaggy met Freddy. No it’s not the name of a new horror flick. Freddy Ferodo is the team mascot of Chris Shield running at car 140. It’s a wee dug wearing clothes and has three ‘minders’, Emma, Ann-Marie and Jess who take this wee dug everywhere and wave it at the rally cars and take photos of it in different situations. Mad? Yes, but good fun, and Jaggy asked Freddy for his ‘pawtograph’ – think about it. Oh, please yourself!

Each year we publish a highly prized and collectable calendar and we are on the look out for suitable, royalty free photos. Any pictures used will be suitably acknowledged hope that you can oblige with pictures of the top 12 or other award winners…