The weather is warm, the drivers are hot and the competition is boiling on this 41st Tunnock’s Mull Rally. So it’s not surprising that cars and crews are wilting and tyres are melting. That’s the biggest issue of the day so far – tyres!

The biggest news is that Calum Duffy has snatched the lead from overnight leader Paul MacKinnon.

“The misfire last night was caused by shit in the fuel,” explained Calum, “the filter was clogged so that seems to have cured it.”

As for Paul MacKinnon, he got a puncture in Calgary: “We clipped a rock and the front tyre went down,” said Paul, “and now the centre diff has stopped working in that last stage.”

Dougi Hall has also dropped behind James MacGillivray to 4th place: “We got a rear puncture with 5 miles to go in that first one today and I think I cooked the clutch a wee bit on the uphill hairpins out of Devaig,” said Dougi.

Willie Bonniwell commented: “Nobody has hard tyres. It’s Mull, it’s October, who would have thought we would have need some hard tyres on this event?”

John Cressey’s co-driving son Martin was awestruck by his Dad’s driving over Mishnish: “The tyres went off half way through – I’ve never been driven so fats in a rally car before,” he said.

So just how difficult are conditions? Calum Duffy said:” I had two of the biggest moments of my life in there on the new tar,” he said, “full max power slides and I wasn’t sure I was going to get away with it.” Fortunately for him, and use, he did.

So if you think it’s warm for us just outside watching, what must it be like inside those cars today?

This is the Entry List for the 1996 Tour of Mull 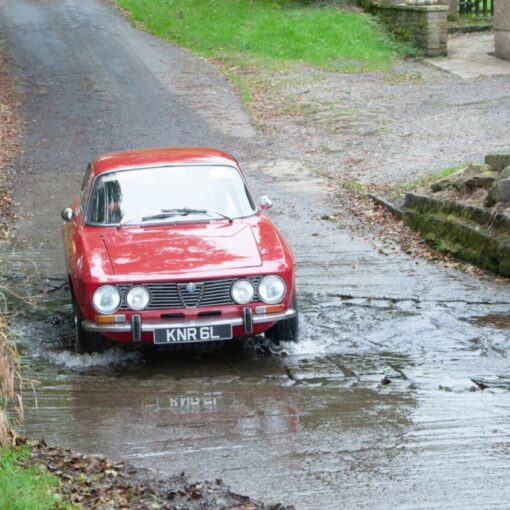 There’s an interesting mixture of young and old out on next week’s Andy Mort Tour – and that’s just the drivers! As […]